On the 16th of November 2018, Hearts ASC hosted their Club Celebration Night at Boroughmuir Rugby Club. This event is held annually and aims to get all swimmers and their families together to celebrate the year’s achievement and successes. The event was very well supported with more than 100 in attendance. The Club President, Donald MacInnes, spoke about the successes of the 2017/2018 season and Head Coach Phil Potter, who was unfortunately tied up with British Swimming, gave a recorded speech by video link. FaST2 coach Michal Adamek presented awards from the Club Championships and Volunteer of the Year.   The evening finished with a disco with all of the swimmers up dancing!

The next Celebration Night is to be held on Saturday 16th November 2019 at Colinton Bowling Club. 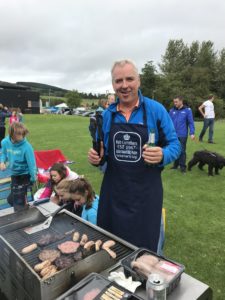 The annual summer family BBQ was held on Saturday 18th of August at Lochore Meadows. There was a great turnout and the rain mostly held off. Rob Carruthers, our Aussie chef, did a great job of cooking on the BBQ whilst a large game of rounders was played nearby! We were lucky to be provided with free entry to a local event which allowed access to fairground rides, hair styling and a silent disco.

The 2019 Summer BBQ is going to be on Cramond Beach beside the walkway to Cramond Island, on Sunday 18th August. 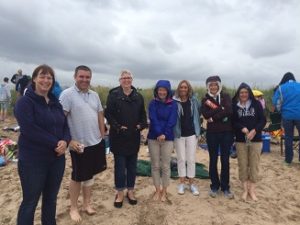 The summer beach barbecue was held at Yellowcraigs beach on 6th August 2017.

We all had great fun, and didn’t let a little drizzle get in the way.

Some of the parents topped up their tans, Donald making it look like summer while everyone else was in multiple layers!

There was a great turnout and plenty of burgers and sausages to feed hungry swimmers. 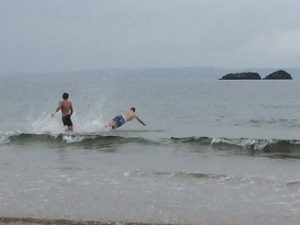 The kids were all keen to get in the water.  Strangely enough none of the parents dived in!